Today I’ll be comparing the new streaming media player devices from Roku and Amazon. I’ll be reviewing them to see which has the best interface and which one performs best for streaming media.

A Quick Note on the Tivo Roamio DVR

I was going to include the Tivo Roamio DVR in this overview, but I don’t think I’m the target market. The Tivo Roamio pulls in stations over the air, not an option for me as the airwaves are congested where I live. Tivo also charges a $15 a month subscription for the program guide feed. These are two significant drawbacks that may or may not influence your buying decision.

The Sticks: Amazon Fire vs. Roku

The Amazon Fire Stick features an HDMI connection and retails for $39.99. It comes with an HDMI extender that helps it plug into your TV if your ports are not easy to reach. The Amazon Stick includes a micro USB cable and a power plug. The Amazon streaming media stick features a dual-core processor with one gigabyte of ram. A remote also comes with the unit, and users can also opt for a voice controlled remote as an upgrade. The benefit of owning the Fire Stick lies in the various apps you can deploy using the device. 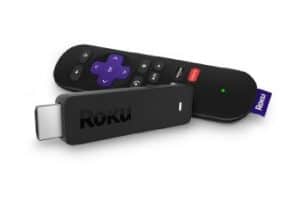 The Roku Stick (retail price: $49) is an obvious competitor to Amazon’s Stick and has an almost identical physical footprint. The Roku streaming stick also uses an HDMI connector for interfacing with your television. It features a micro USB port for power located in the back of the device. Both USB cable and power plug are included with the device along with a remote control.

Roku’s standard remote features presets for quickly accessing different media providers. These remote presets include Netflix, Amazon Prime Video on Demand, Google Play and Sling. Roku remote controls are known for their easy access controls, and Roku’s new stick is no exception. The Roku remote is very easy to use and simple to learn for those who are new to media sticks.

Setting Up the Sticks

Setting up Amazon’s stick media streamer is an easy process. You just need to plug it into the side of the TV. To power the device, go ahead and plug in the included micro USB cable to the side of the device. You will next need to plug that cable into the wall (using the included wall jack adapter) because Amazon states that the unit will get the best performance if you supply direct power to it.

The Roku Stick setup is basically plug and play. You connect it to your TV and power it in much the same way as the Amazon Fire streaming stick. Just find an available HDMI port on the back of your TV, and then connect the USB cable to the wall (using the wall adapter) for its power source. 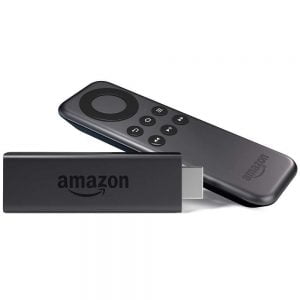 The Amazon Fire Stick features a graphical menu interface that has you navigating tiles. You start at the top and navigate your way down to the bottom and the right. Amazon video content, as well as various apps and games, are featured prominently throughout the interface. The interface is fairly smooth and reacts without hardly any slowdowns. Your category options run along the left hand side and include movies, TV, your watch list, a video library and games. The games are played right on the Amazon Stick’s built-in processor. The lower section includes access to your other multimedia content, which includes pictures, photos and music.

The Roku menu system uses a different metaphor compared to Amazon. In the Roku ecosystem, everything is an app. You’ll first need to select an app to see any content. This is much different than Amazon, where category breakdowns of your content are accessible using one click on your home screen.

Roku also allows you to download various applications to customize your experience. The big inclusion here is the Google Play store and its broad selection of movie and TV content. The Roku also supports the Amazon Prime store, so you won’t be missing out on Amazon’s content just because you opted for a Roku instead. I really liked the one-touch access to the various major apps using the Roku remote. Most of the time I just want to watch Netflix, and I just push the little red button to go to my Netflix queue. The Roku’s interface feels more responsive compared to the Amazon Fire Stick. There is a Roku remote application that you can download for your smartphone device. I have to say that it’s quite impressive, allowing for private listening using the mobile app. This is a very useful feature if you don’t want to bother anyone else while you watch TV. Voice search is also a nice touch and allows live search across different apps.

Which Media Stick Is the Best?

This was a tough decision, but I think the best device between the Roku streaming stick and the Amazon Fire is the Roku Stick at $49. I feel the overall user experience is best on the Roku, with its app layout and navigation menu allowing for a more streamlined interface. The caveat is that there are no gaming apps on the Roku. If you’re big into gaming, Amazon’s Fire Stick might be a better choice.